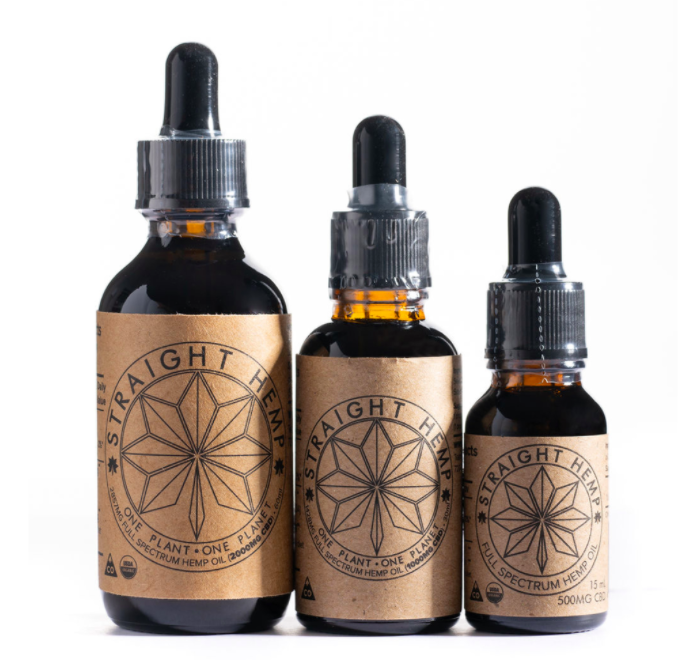 Straight Hemp’s tincture came plainly packaged in a cardboard box with a cut out in the middle to allow viewing of the 15mL glass bottle. On the front of the bottle, it showed the company name, log, size, and mg level (this one was 500mg). On the right of the cardboard box, it showed the supplement facts, suggested usage (recommended dosage is ¼ or ⅓ dropper up to 3 times a day), ingredients, warnings, and manufacturing information. On the back of the box, you can read the company’s commitment to quality statements. On the right side, you can view the contents of the tincture, as well as the manufacturing process (just like how it’s stated on the company website). Lastly, at the bottom of the box, you can scan a QR code with your phone’s camera to view Straight Hemp’s third-party lab testing results.

Once you open the box, you remove a little cardboard flap and pull out the actual bottle of tincture. The darkly stained glass was almost black, but you can still view the contents if you hold the bottle up to the light. There was a plastic protective seal that was easily removed via a perforated strip. The light brown label wrapped around nearly the entire bottle and showed the same information as the cardboard box. I could smell the scent of the tincture even before opening the bottle. I shook the bottle vigorously for a few seconds and unscrewed the dropper (which was surprisingly not child-proof) and held the bottle to my nose.

The scent of hemp was strong, and reminded me of pine needles. I squeezed the small dropper nub and observed the color of the liquid to be dark yellow, much like cold-pressed olive oil. I also noted that the dropper wasn’t graduated, meaning I’d have to guess how much I’d be taking in a single serving. The instructions stated that ½ a dropper was equal to 10 drops, roughly 1mL dropperful. I measured out what looked to be about half a dropperful and released it under my tongue. The tincture felt cool underneath my tongue, even though I knew there wasn’t any menthol in the flavoring. I held the tincture beneath my tongue with some difficulty. Due to the consistency of the tincture, I felt like it was a lot more oily than the tinctures I’ve recently tried. The taste of the tincture was somewhat bitter but smooth, and the aftertaste wasn’t as bad as I imagined it would be.

CBD Gel Capsules – Not All Hemp is Created Equal™