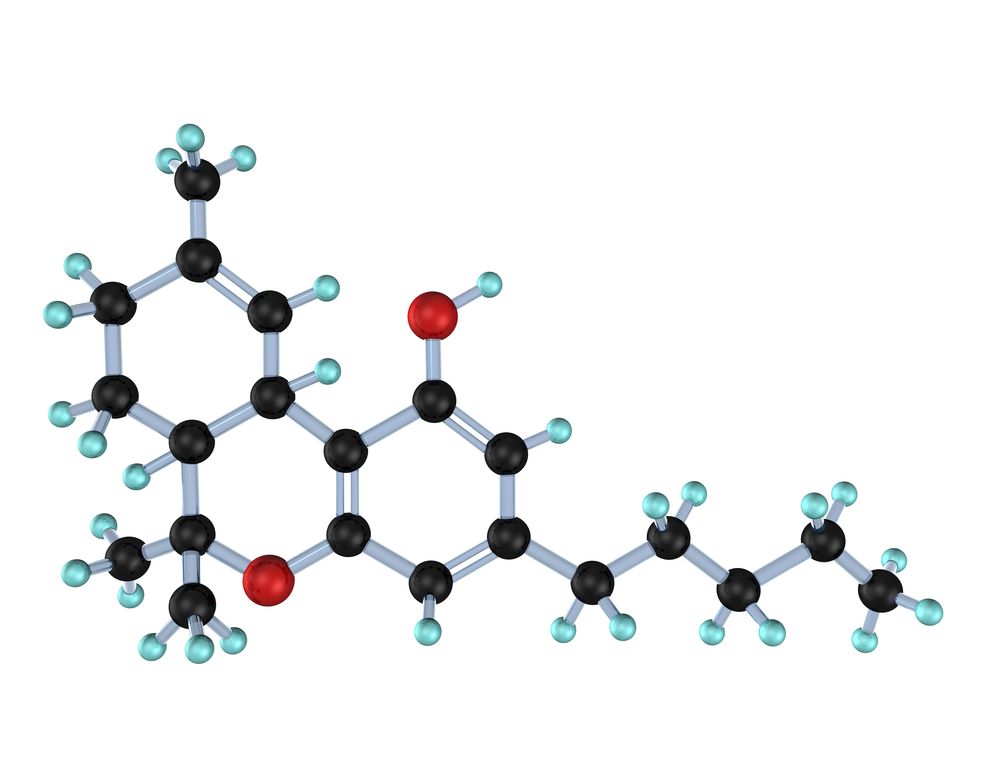 THC, or tetrahydrocannabinol, is the chemical responsible for most of marijuana’s psychological effects. It acts much like the cannabinoid chemicals made naturally by the body, according to the National Institute on Drug Abuse (NIDA).

THC is one of many compounds found in the resin secreted by glands of the marijuana plant. More of these glands are found around the reproductive organs of the plant than on any other area of the plant. Other compounds unique to marijuana, called cannabinoids, are present in this resin. One cannabinoid, CBD is nonpsychoactive, according to the National Center for Biotechnology Information, and actually blocks the high associated with THC.

Effects on the body

THC stimulates cells in the brain to release dopamine, creating euphoria, according to NIDA. It also interferes with how information is processed in the hippocampus, which is part of the brain responsible for forming new memories.

THC can induce hallucinations, change thinking and cause delusions. On average, the effects last about two hours, and kick in 10 to 30 minutes after ingestion. Psychomotor impairment may continue after the perceived high has stopped, however.

“In some cases, reported side effects of THC include elation, anxiety, tachycardia, short-term memory recall issues, sedation, relaxation, pain-relief and many more,” said A.J. Fabrizio, a marijuana chemistry expert at Terra Tech Corp, a California agricultural company focused on local farming and medical cannabis. However, he said, a study in the British Journal of Pharmacology found that other types of cannabinoids, as well as terpenes (compounds that produce flavor and fragrance in plants), can modulate and reduce negative effects.

The effects of marijuana make it a popular drug. In fact, it is considered one of the most commonly used illicit drugs in the world. But these effects also concern mental health advocates. THC can trigger a relapse in schizophrenic symptoms, according to NIDA.

Another possible risk of consuming THC comes in the form of impaired motor skills. Marijuana may impair driving or similar tasks for approximately three hours after consumption and it is the second-most common psychoactive substance found in drivers, after alcohol, reports the National Highway Traffic Safety Administration. People taking medical marijuana are instructed not to drive until it has been established that they can tolerate it and conduct motor tasks successfully.

The use of marijuana may cause problems for younger people, and long-term problems. “Some of the side effects of THC include a decrease in IQ, memory and cognition, especially in younger people,” said Dr. Damon Raskin, medical director at Cliffside Malibu Treatment Center. “However, the jury is still out on long-term effects, as not enough research has been done on it yet. There is some speculation that it could impair fertility in men and women and also compromise a person’s airways, but the studies are still not clear.”

A study by the University of Montreal published in the journal Development and Psychopathology in 2016 found that early use of marijuana can affect teens. Smokers that start around age 14 do worse on some cognitive tests than non-smokers. The study on almost 300 students found that pot smokers also have a higher school dropout rate. Those that waited to start around age 17 did not seem to have the same impairments.

NIDA reports that rats exposed to THC before birth, soon after birth or during adolescence have shown problems with specific learning and memory tasks later in life.

The drug can also have drug interactions with certain medications.

According to the National Cancer Institute, marijuana has been used for medicinal purposes for more than 3,000 years. As of early 2017, more than half of the United States has legalized the use of medicinal marijuana. Several states have also legalized the drug for recreational use, as well.

THC can be extracted from marijuana, or synthesized, as is the case for the FDA-approved drug dronabinol. Dronabinol is used to treat or prevent the nausea and vomiting associated with cancer medicines and to increase the appetites of people with AIDS, according to the U.S. National Library of Medicine. It is a light yellow resinous oil.

Other studies are showing more evidence that, when used properly, THC has many additional medical benefits. For example, THC may be able to improve memory when taken in small doses, according to a 2016 study on mice.

Edibles, foods containing THC, have become a large problem in states that have legalized pot because of overdosing.

“Edibles can lead to overdose sometimes because people often ingest a full serving of a cookie instead of a diagnosed smaller amount,” Raskin said. “I mean, who eats a half a cookie? It is easier to swallow a cookie and it’s very attractive to younger people or those who don’t want to inhale it in a smoke form.”

Raskin also explained that edibles are extremely high in potency, and when ingested in the gastrointestinal tract, the drug can last longer and with greater intensity. “The effect from inhaling THC will last 45 minutes to a few hours, but edibles can last for six to eight hours and are more likely to lead to a trip to the ER with an overdose,” he said.

Concentrations of THC in cannabis

When THC is exposed to air, it degrades into cannabinol, a cannabinoid that has its own psychological effects. THC concentration also depends on the cultivation of the marijuana plant, known scientifically as Cannabis sativa L.

A type of cannabis that has a minimal amount of THC, as low as 0.5 percent, is hemp, according to the North American Industrial Hemp Council. Hemp is used for industrial and medical purposes.

Some strains of cannabis can have as little as 0.3 percent THC by weight. In other strains, THC makes up 20 percent of the weight in a sample. The National Highway Traffic Safety Administration reports that the average THC concentration in marijuana is 1 to 5 percent; in hashish, it is 5 to 15 percent, and in hashish oil, it averages 20 percent. THC in recreational doses of marijuana is highly variable and the lower the THC content in the marijuana, the more the user must consume to produce the desired effects.

What Is CBD Water And Where Can You Buy It?

What Is THC (Tetrahydrocannabinol) And What Does It Do?