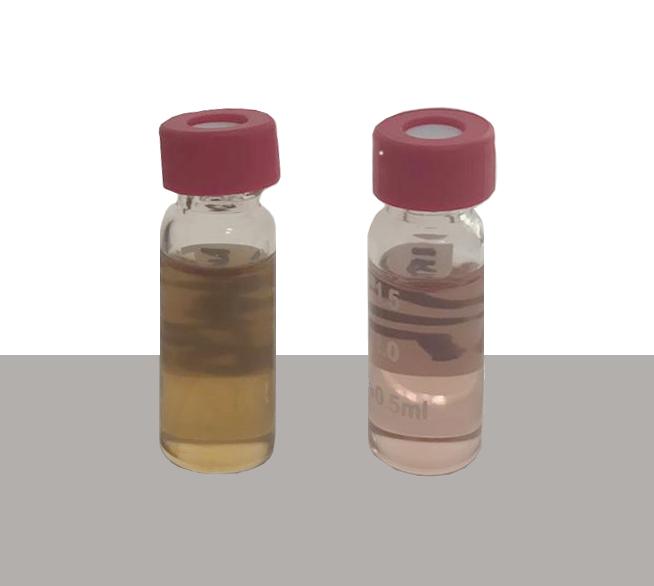 Two identical drams of CBD from Avicanna’s laboratories demonstrate the lighter, pinkish one on the… [+] right was exposed to oxygen.

CBD water is a perfect example of capitalism at its phoniest. While plenty of companies are looking to cash in by claiming their products contain beneficial CBD, CBD water is the easiest example of how a fool and his money are soon parted.

CBD or cannabidiol, the low THC product that everyone touts as being “the non-psychoactive form of cannabis,” (which in and of itself is slightly misleading, but that is for a different column) destabilizes when exposed to light or oxygen. Legitimate CBD products are sold in dark, opaque bottles with labels that warn the consumer to store the bottle away from light, in a cool, dark place.

Scientists are just beginning to understand how hemp-derived CBD is beneficial to the human body’s endocannabinoid system. Depending on the manufacturing process, the minuscule amount of CBD that CBD water contains is most likely rendered ineffective when it is exposed to light for an extended period of time, such as being stationary in a brightly-lit supermarket refrigerator or storage facility all day. CBD products should be kept out of direct light, in order for the CBD not to destabilize.

Some manufacturing processes may be able to keep the components stable while exposed to light in the short term, but it will not remain stable if the water is sitting on a shelf for months or even weeks.

That means CBD in a clear water bottle stored on a brightly-lit supermarket shelf is most likely completely useless and provides no other benefit than the regular hydrating effect of plain water.

Assuming some manufacturer takes the initiative to sell CBD in dark brown glass bottles, like Guinness, from the moment the cap is opened and oxygen hits the product, it begins to destabilize.

Therefore, putting a dropper full of CBD into a bottle of water and sipping it here and there is not advisable either. Opening and closing the bottle numerous times and allowing oxygen and light to penetrate the container weakens the CBD, rendering it all but ineffective, quite quickly. (Unless fitness buffs do this at Soul Cycle, where the room is pretty dark and cyclists tend to chug.)

“Cannabinoids are susceptible to degradation and specifically oxidization which is very concerning, as some of those degradants are toxic. Cannabinoids are most stable in their trichomes on the flower or even in the resin where the terpenes and other natural chemicals provide some protection and anti-oxidation properties. This is why purified or isolated CBD-THC are very unstable unless properly formulated,” said Aras Azadian, CEO of Avicanna, exclusively in an email.

Green Rush Daily published an article last year stating, “The World Health Organization (WHO) has done extensive research regarding CBD water. Unsurprisingly, their findings have shown that the water can provide a variety of health benefits.”

In fact, according to the spokesperson for the WHO, they have never heard of this mythical research. “The team has no idea where this journalist got his information. Perhaps ask him to send the report he mentions?” the spokesperson said via email from Geneva.

While the head of the WHO recommended on January 24, not to include CBD in the 1961 Single Convention on Narcotic Drugs, the world body is certainly not endorsing CBD water.

That aside, Love Hemp water, for example, is another company in a string of bandwagon jumpers that hopes to rope in unwitting consumers and cash in on the CBD craze. There are only two milligrams of natural hemp extract in Love Hemp water, which is virtually useless. To provide a visual, two milligrams of powder would fit on the end of a toothpick or a toothbrush bristle.

Furthermore, a daily dose of at least 10-25mg is recommended to be beneficial to the human body’s endocannabinoid system, for non-medical reasons. At that rate, a person would have to drink five to thirteen bottles of Love Hemp water per day, provided it is stored in the dark, such as in a wine cellar, before purchase, then consumed all in one shot.

Additionally, when the body needs the benefits of CBD right away, the efficacy of a .2mg serving is non-existent. GW Pharmaceuticals doses at five to ten milligrams per kilogram of body weight. That means a person who weighs 120 lbs (54.431kg) would theoretically need approximately between 272 and 554 milligrams of CBD per day, for the dose to be efficacious, as opposed to two.

“Besides, one milligram typically gets stuck to the bottles,” adds Azadian.

“We do not yet understand what a healthy amount of cannabidiol is in the body for chronic use.  I take 45mg per day, and have done so for about a year and a half. What level is right for everyone is honestly still to be determined by emerging science. Our research had led us to believe everyone should have a little bit of cannabidiol in their body every day. In high doses, it is well tolerated,” said Chris Bunka, CEO of Lexaria BioScience.

Mr. Bunka’s company does medical cannabinoid research and holds four patents in the USA and Australia, and has 45 patents pending on the delivery of cannabinoids.

“Love Hemp water is not designed –I certainly hope– to treat any medical condition. I hope they are positioning themselves as more of a supplement company,” he added.

According to Pop Sugar, another brand, CBD Living Water, “has 2.5 milligrams of CBD per bottle, but due to the nano application, you can get up to nine times the effect — 22.5 mg.”

“That is a terrifically sloppy way of insinuating they have super bioavailability; and, at such a high implied rate as to be nearly impossible. At worst, it showcases a terrific lack of knowledge and is simply not responsible,” debunks Bunka.

Take CBD water companies’ beneficial claims with a grain of salt, because that is about how much CBD their bottles contain.

To get the maximum health and wellness benefits out of CBD, consume it sublingually directly from the original, opaque medicinal or supplement bottle, and eschew gimmicky CBD water.

What Is CBD Water And Where Can You Buy It?

What Are the Most Popular Marijuana Products?